President Yoweri Kaguta Museveni on Friday launched the commencement of mandatory testing for COVID-19 for all incoming passengers at Entebbe International Airport.

Museveni launched the exercise saying it will be conducted by the government.

He says the exercise will commence with immediate effect, saying the Entebbe international airport laboratories will used as government testing facilities  for all incoming passengers through our airport.

Museveni however noted that the Inter-ministerial committee on COVID-19 response had asked for a few more days to construct a canopy as well. The canopy is supposed to be over the walkways to protect passengers from direct sunlight and the rain.

He responded saying,  “I have no problem with it, but I asked them to start the process of testing that very moment. The rest can come while testing is going on.”

Museveni also commended the Prime Minister Robinah Nabbanja, who chairs the Inter-ministerial committee for coming up with the idea of government conducting the  mandatory testing  exercise.

He lauded the Uganda Civil Aviation Authority – UCAA and the Uganda People’s Defence Forces-UPDF engineering brigade for providing space and setting up prefabricated structures to host banks that will receive payment for the Covid-19 tests, Port Health desk, the sample collection rooms and waiting areas.

Nabbanja, the Prime Minister, justified the exercise saying it will help in curbing the spread of Covid-19 and also prevent the importation of various COVID-19 variants.

Since May, private laboratories have been testing un-vaccinated passengers from ten high risk countries such as Kenya, South Africa, South Sudan and the United Arab Emirates among others.

However, most of these travelers have  been complaining about long waiting hours  and the high cost of the test.  The exercise has been taking place at Peniel Beach, two kilometres from Entebbe airport and each passenger pays 65 US Dollars about shillings 250,000.

But in mid-September, the government announced that all incoming passengers, regardless of their vaccination status, will be tested by government laboratories.

Fred Bamwesigye, the UCAA Director General, during the launch of the mandatory testing exercise noted that  setting up government laboratories at the airport is a great idea because they will be swabbed from the airport and will get their test results in less than three hours.

Vianney Luggya, the spokesperson of UCAA says the regulator will now issue a notice to Airmen – NOTAM informing the airlines on the requirements for mandatory testing exercise and how it will be conducted.

The NOTAM usually takes effect after 48 hours after it has been issued inorder to give air operators and their clients time to prepare and adjust accordingly.

As a result, some sources within the Inter-ministerial committee think the exercise will commence on Sunday night.

The private laboratories will continue testing unvaccinated passengers from the ten high risk countries until the mandatory testing exercise starts at the airport.

The exercise was initially expected to be conducted by six private laboratories starting September 3.

The Inter-ministerial committee  however postponed the exercise for two weeks in order to allow laboratories set up at Peniel Beach and also give the committee time to assess the readiness for the exercise.

But the government decided that it would  takeover the mandatory testing exercise in mid-September.

As a result, the government has been preparing for the mandatory testing exercise since September 22. This involved planning and releasing funds for the exercise.

The committee is  composed of officials from the Office of the Prime Minister-OPM, UCAA, UPDF, ministries of health, finance, foreign and internal affairs.

It allocated a total of shillings 78 billion for implementation of the exercise.  This involved setting up the laboratory, sample collection and waiting areas among other items at the airport. For instance, shillings 44billion will be spent on testing kits and reagents, shillings 15 billion on completion of the arrival hall covered in the project to modify  the current passenger terminal building while shillings 4 billion has been earmarked for  salaries and allowances of the sixty staff at the testing centre.

The Uganda People’s Defence Forces-UPDF engineering brigade completed setting up prefabricated structures at the air side to host port health and sample collection and also the waiting areas for passengers at the exit of the current passenger terminal building.

The laboratory has been equipped with five PCR machines with a total capacity of testing 300 samples within an hour and 3,600 samples within 24 hours. The airport handles an average of 1,300 incoming passengers daily.  Results are expected to be released in two hours and 15 minutes.

Travellers who will test COVID-19 positive will be taken to the public isolation facility at Namboole Stadium or those who opt for private facilities will be quarantined at Mowcribs Hotel in Entebbe and Kerona Dam Hotel in Kampala. These two hotels will change between 60 US Dollars and 80 US Dollars for full board services every day.

Meanwhile, Dr. Jane Ruth Aceng is urging the UCAA to ensure that airport staff and  passengers follow standard operating procedures to curb the spread of Covid-19. 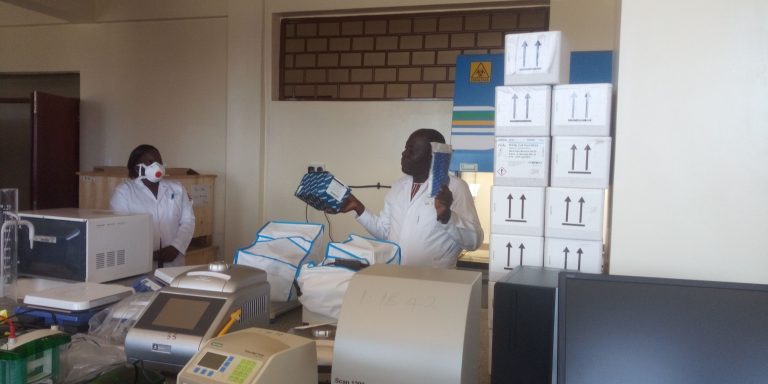