Musician William Otim popularly known as Bosmic also won in Chua West County with 13,796 votes against Ocaya Charles who got only 2,036 votes.

Beatrice Anywar, the state Minister for Environment won the Kitgum Municipality primaries with 2861 votes, beating Oryem Kisinga who got only 2068 votes. 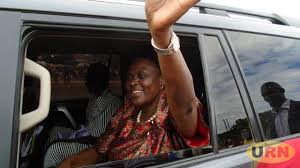 She won with 17,429 votes beating Betty Grace Akech Okullu in the second position after she garnered only 3,890 votes.

In Tochi County Francis Obutu won the race with 4,269 votes beating Constantine Opiro and Laker Evelyn Otim who got 1,467 and 1,320 votes respectively.

Omony Oscar, the youth MP for northern Uganda also lost the NRM primaries to Tony Awany after he only gathered 2,086 votes against 3,406 votes.

56 Arrested For Not Wearing Facemasks In Kitgum